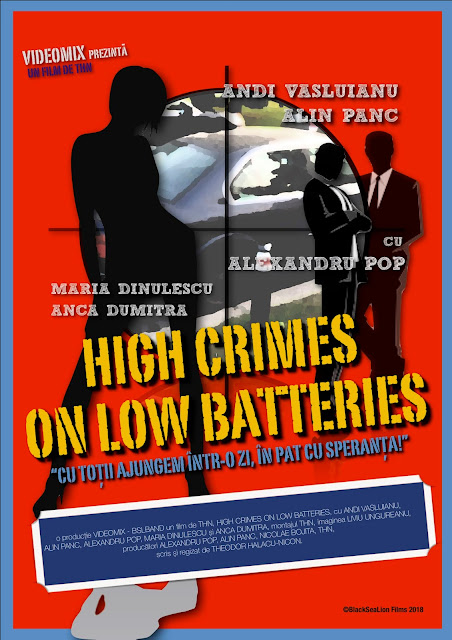 WE ALL GET, ONE DAY, IN BED WITH DESTINY!

KING and VICTOR are two kids from a bad neighborhood from Constanța City and as best friends they were young outlaws working for the local head of the mob, Dennis, Victor’s dad.

As they grew up, once with the changes, the kid’s paths took different directions: Once Dennis brought his pander business to Bucharest and he got maked Boss, Victor was always close to his him, but because he was always kept away from the family business decisions, and grew as a spoiled child and he became a Big child with big guns as toys.

King, after being left alone in Constanța, kept looking for a way out and finally found a way to flee to the United States, where he pursued a professional career as a hit-man.

After a crime life of over 30 years, once he was just about to settle, King got unlucky as he was landed a twisted job, which got him involved in an inside quarrel of an Old mob family in New York, and after he got caught, before finishing the job, once stated that he was just a hired hand and not part of the families, he ended up being exiled back home, once the Mobs decided to solve their problem in-house.

For Victor life turned out to be easier: A few years son of the Mobb boss in Bucharest, and once his father ended up death, sortly, by the hand of inside competition, he remained part of the family, as, Uncle Tony, another important member of the organization, married his widdowed mother, who was his high school sweetheart, and after ending Dennis’ reign, which although short, brought them wealth, and as the man was not stupid,  he left behind a strong will, stating that Victor, will inherit all the fortune only once he gets married.  The will has been kept secret from Victor, and now time has come, as he is in love with one of the present Mob Boss in Bucharest, Big Ben’s stripper named DESTINY and they plan to get married.  Uncle Tony wants Victor dead, so he can get his hands on the proprieties, before this happens.

After 34 years, King and Victor, both professional hit-men on their own right, are working for the same criminal organization based in the Bucharest, now ruled by a new boss, a cruel, wicked criminal, Big Ben, just got much serious about his position, now that his father, Uncle Pinky, the late boss, passed away, and as he smelled the oportunity to cash in the inheritance himself, decides to partner with Uncle Tony, and sets them up as a team for a few jobs, all meant to end their lives:

King's exile brought him back to the place he would find sanctuary: back home in Constanța City.  Life has been harsh and although he became a professional, here, he must take it all from the start. After a number of small jobs for the heads of the organization in the Bucharest as a local representative, once with the new changes, he is now promised a promotion to Bucharest, but only if the last job goes well. Victor is sent to Constanța to partner with him on this last job, and the two friends reunite once again, not only as a perfect killing machine pair, but also as two over aged hit men, whose life perspectives have changed, and both dream now at quitting.

Although both try to keep a straight face in front of the other, King and Victor are now just two over grown kids, when it comes to their relationship which seems to start exactly where it was left 34 years ago. Influenced by the drugs from the last job gain and lacking concentration, they begin to fail every job they are given by Big Ben, unknowingly driven by their destiny, and with each failure, they are actually escaping each other set up of the Ben's wicked plans to get them killed and solve Uncle Tony’s problem.

Now, how this ride will end?...  It is all in the hands of Destiny!

HIGH CRIMES ON LOW BATTERIES, is an action/black comedy film, with a comic book feel, set in a real world with fictional characters inspired from the Eastern European world of the Organized Crime Families.

It's original story develops as a “feel good” action piece, in the likes of films like 1994 Pulp Fiction, on a classic playlist of songs which inspired the pace of the film: featuring songs bands like Fun Lovin’ Criminals, Stretch, The Rolling Stones, Otis Redding and Tom Waits.

“HIGH CRIMES”, although an eastern europen story, finds its inspiration on Elmore Leonard’s and Iceberg Slim’s books, trying to bring back that style, into the present time, the feel of the 1970s gangster era, now somehow justified here, in the reality of Eastern European Mobs life, where they still act like, around, in this part of the world: A world of Panders, Hookers, Strip Bars, Drugs and Villainy, which still exists and defines corruption in this country - but once seen from their perspective, is becoming more of a comic book.

Posted by Theodor Halacu-Nicon at 6:04 AM No comments: